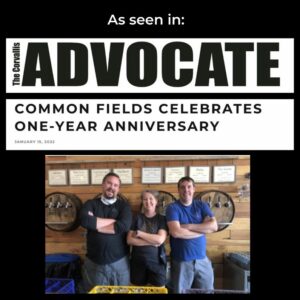 When you follow your passions with an adventurous attitude, who knows what can happen?  The first summer of the pandemic I had the opportunity to interview Jacob Oliver about becoming the first tiny house food truck owner, and his pursuit of turning it into part of a restaurant.  His resiliency and ability to adapt with all the Covid restrictions challenged his passion.  He, his team and his family succeeded with building the business.  Common Fields launched officially in January 2021.

Since I, too, have also been following my passions, I freelance write for a local paper – the Corvallis Advocate.  Here is the link to the Common Fields One Year Anniversary story https://www.corvallisadvocate.com/2022/common-fields-celebrates-one-year-anniversary/ – or read the slightly adapted version below.  Tiny House Food Truck Pod Dreams is the original blog post on Jacob and his vision. 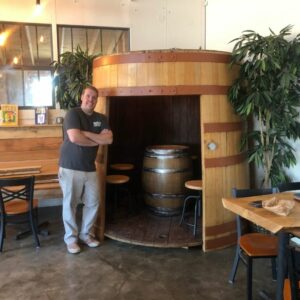 Through MLK weekend, Common Fields is doing what many other start-up restaurants hope for – celebrating a successful first year in business. With four food trucks – two of which are custom-built tiny houses, live bands, the local roller derby league Sick Town Derby Dames, and other local vendors – plus independent Oregon craft beers, wines and ciders – this is the place to be. 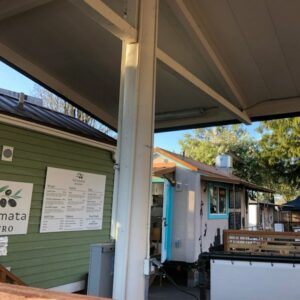 Jacob Oliver started dreaming of owning his own restaurant during the years of working at all levels in the food industry. Over nine years ago he started at the farmer’s market with a specially concocted hummus. Over time, he observed that Corvallis didn’t have healthy Middle Eastern foods. Since food trucks offer easier entry to a restaurant business, Oliver considered a used cart until he discovered a tiny house builder in Albany who would create his mobile eatery. Once built, Kalamata became a recognizable place for good food at Corvallis events.

Wanting a place to park their food truck full time, Oliver and his wife explored the small zone designated by City Hall for opportunities. The former auto transmission repair station at Western and 3rd sparked their imagination. As parents, they envisioned a mix between an adult bar and a playground in the garage bays, and in the parking lot – Corvallis’ first food truck pod. Oliver started renovations in early 2020, and by that summer was able to park Kalamata in the lot. Making sure his concepts worked, and challenged with the restrictions from the ongoing pandemic, Oliver had soft openings that summer, with his official grand opening the following January. 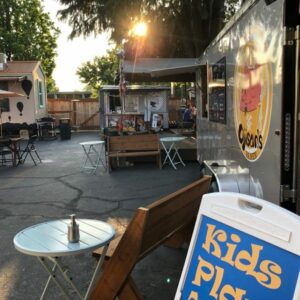 Two food trucks on either side of the stage – one offers BBQ & desserts, the other award-winning Ramen.

With his mission to deliver uncommon – yet quality – offerings, Oliver was selective in his choices. Kalamata was soon joined by Terra’s Tastee Treats and Ojisan Ramen. Oliver’s friend, Diego Irwin, also had a tiny house food truck built, and in February 2021 ZIA Burritos was parked next to Kalamata. 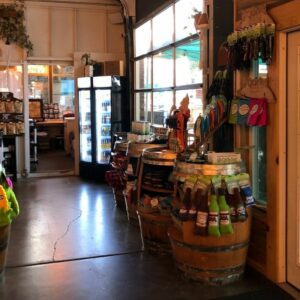 A fridge full of small, craft brand hot sauces and a variety of branded items. My favorites are the dog toys – so fun!

Inside the former garage bays are handcrafted tables, a little room created from an old barrel, games to rent, a full selection of artisanal hot sauces for sale, and most recently an expanded array of branded merchandise – including dog toys. Oliver is proud of the new Magnet Wall, a GoFundMe project two years in the making, featuring unique marble mazes adults and older kids can create. 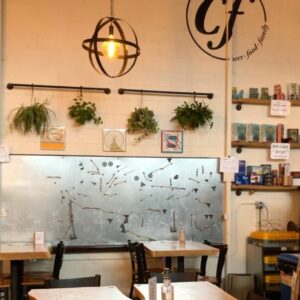 Oliver hired a stage manager to find and curate entertainment on a regular basis. The bands are usually well-established, and play music at a volume that doesn’t overwhelm diners’ conversations. Comics are featured every first Friday, and drag shows every other month.  Artisan and Maker Markets pop up and feature local vendors. Common Fields also co-hosts with 500 Women Scientists and the Tap Talks Corvallis.

Oliver has committed to supporting local causes. When he first only had the Kalamata food truck, he would rotate charities, including the Jackson Street Youth Services. In 2021, through various efforts – including Common Fields’ “Dine Out” and “Hops for Hope” campaigns – they raised $5,735 for not only Jackson Street, but also for the Heartland Humane Society of Corvallis, Senior Dog Rescue of Oregon, Letitia Carson Elementary School, Heart of the Valley Runners, Corvallis Montessori School, and MGYaware. Coordinated with the Downtown Corvallis Association, the Common Fields building’s backside also sports the “Greetings From Corvallis” mural. 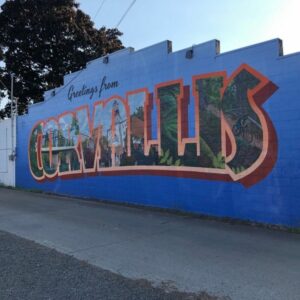 A recent addition to the murals of Corvallis is this cute postcard-ready one.

Opening during the pandemic, changing plans and physical layouts to accommodate health requirements, plus creating community and supporting the community is a worthy achievement to celebrate. Oliver, who received a place on The Advocate’s list of Corvallis’ Most Impactful for 2020, has more plans for the future, including another tiny house food truck that will feature German cuisine.

Congratulations to Oliver, his family, the other food trucks on a successful first year and many more to come.  Keep following your dreams! 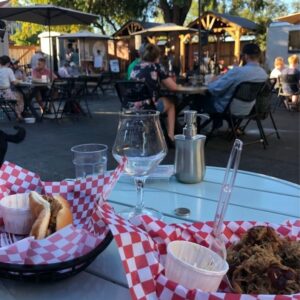 Watching the band while eating food truck cuisine and drinking local beverages is a pleasant way to spend a summer evening. 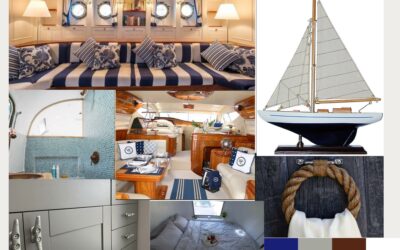 What do you want?  When following your passion, the advice is to find what makes you feel good and go do more of...

END_OF_DOCUMENT_TOKEN_TO_BE_REPLACED 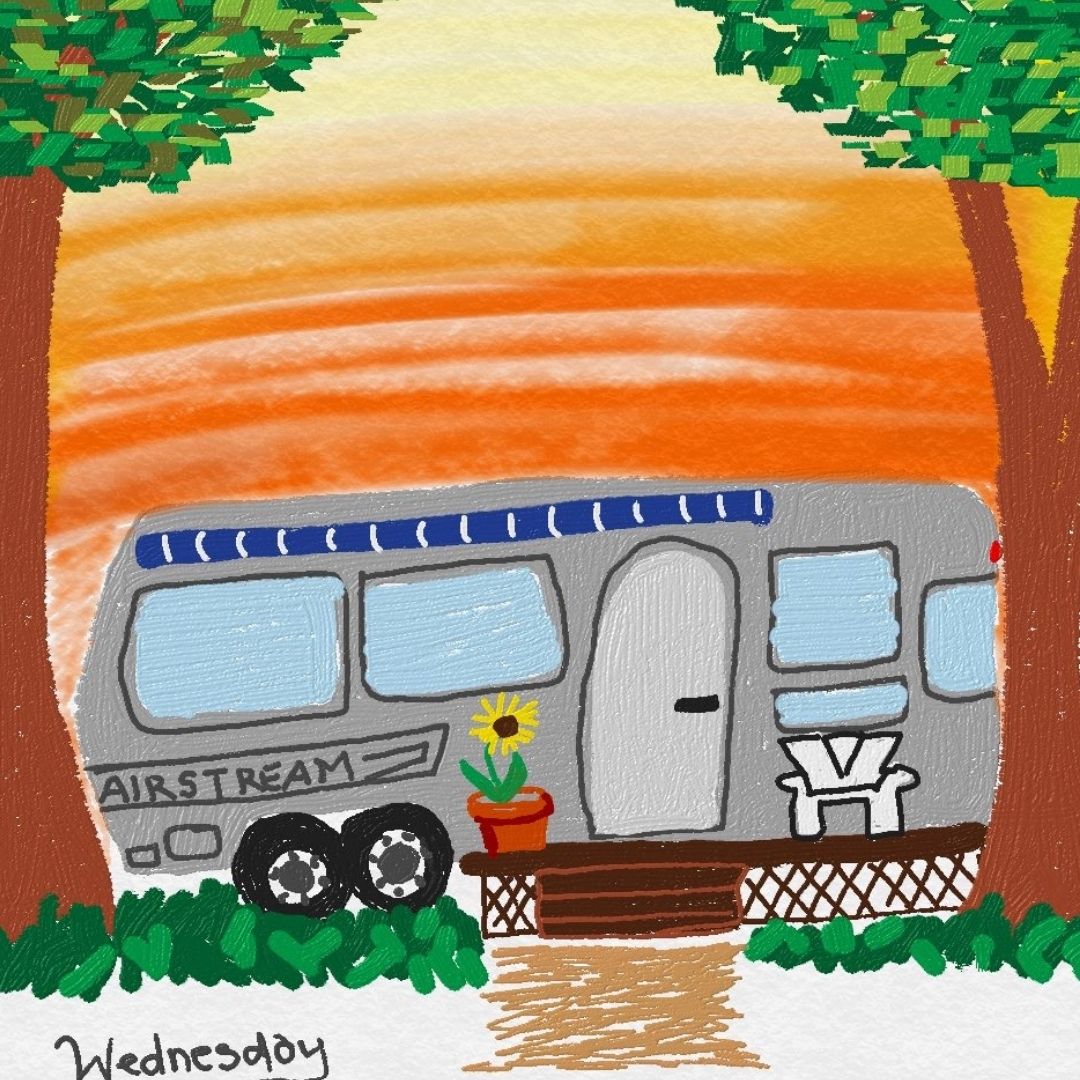 Have you been considering renovating a vintage airstream? One of the most common questions we receive is asking about...

END_OF_DOCUMENT_TOKEN_TO_BE_REPLACED 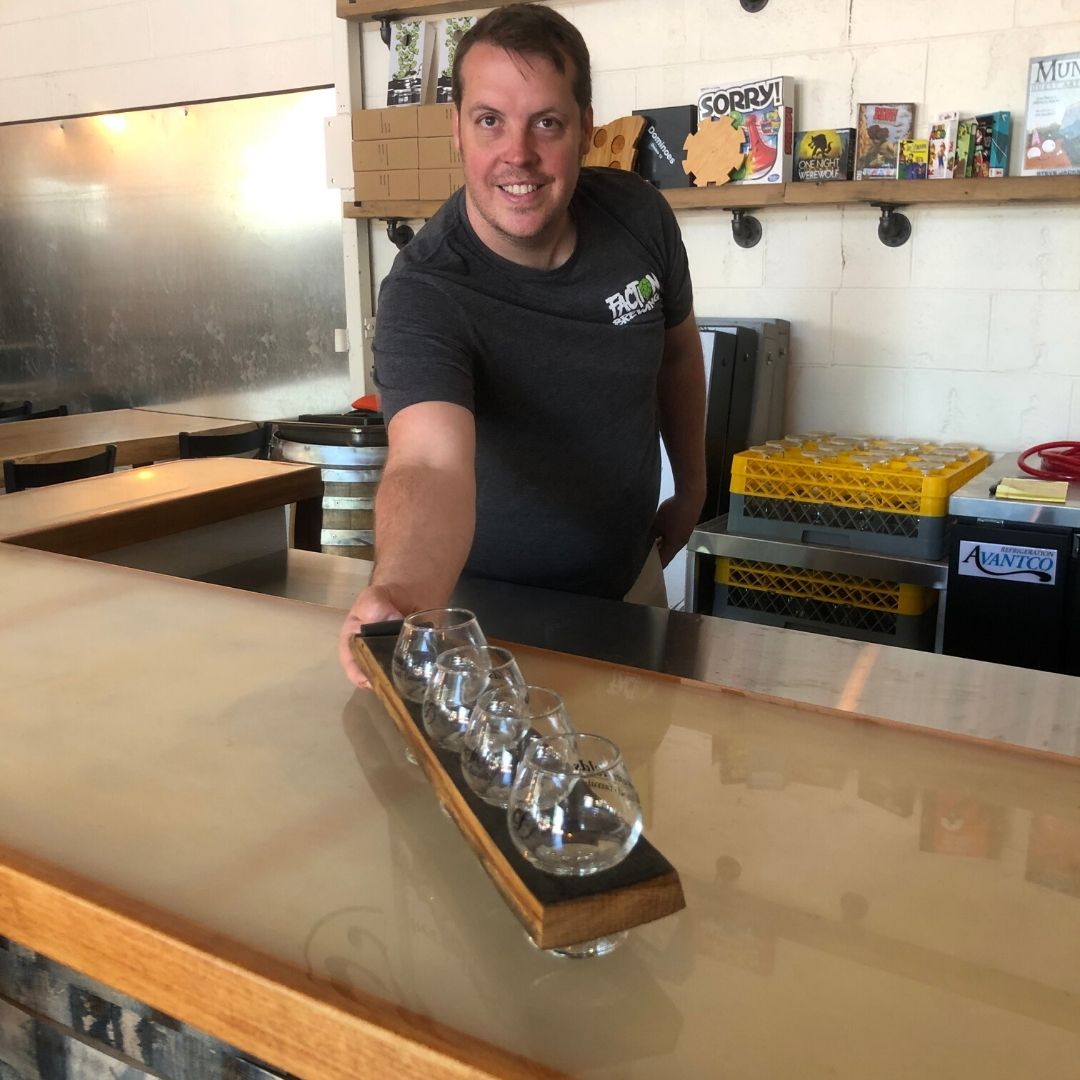 Jacob dreams of a pod of tiny house food trucks at his Common Fields tap room. When you’re washing dishes for hours on...